I'd been thinking about buying a small low-powered PC I could use as a server for a while, but I couldn't find one I liked, one that was fanless and not ridiculously expensive (or at least too expensive for what I considered its worth).

I like my Acer Aspire Revo R3610, but it's way too noisy to be left on permanently. I had initially passed on the XS35, I think because of a prejudice against Shuttle liking to use custom parts rather than standard ones, but I came back to it and eventually took the plunge. 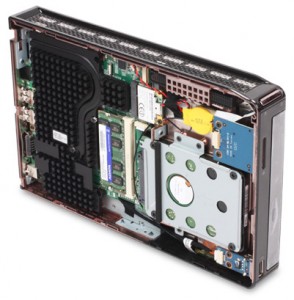 Part of the reason for picking the XS35 was it's fanless. Quite a few systems stated they were silent, but when you got into the specs they still had fans, not a recipe for silence in my experience. The XS35 has no fans. I was going to put an SSD in it and run it with no moving parts at all, but the price/performance of a 2.5" drive was too good and my experience with the Scorpio Blues is they are silent for all intents and purposes. So the machine runs totally silent, only the (overly) bright LED on the front indicates it's on.

I've been running it for a while and I have to say I'm impressed. It sports a dual-core 1.66GHz D510 Atom processor, but lacks the NVIDIA ION graphics of the Revo (they XS35GT comes with ION), instead running Intel's GMA 3150, so it's not quite as capable as the Revo for multimedia or graphics heavy tasks, but otherwise the processor is actually quicker.

I've installed Ubuntu on it and it's been running non-stop without issue. I mainly use it as my development web server, but have recently been playing with Tonido and sharing photo libraries with friends and family that way seems to be working out OK, I have yet to try a few other aspects, such as video, files and music. I could have bought a NAS or some other preconfigured device, but the benefit of buying your own machine is you can put whatever software you want on it and with a full OS you can run any application available. 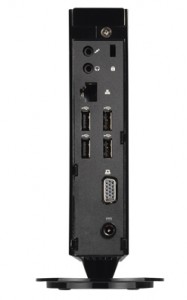 I've got Ubuntu's VNC server running to give me remote access and it seems capable enough to allow browsing and general tasks that would satisfy most people. A benefit over the Revo is the option to fit a slim-line optical drive, something most mini ITX devices do without, which allows greater flexibility, should you want to use it as media centre, for example.

Noise was one reason for going for a separate machine as an always-on device, another was power usage. The XS35 idles at around 16W according to my inline power monitor, with it reaching 21-22W under heavy load. That's pretty impressive.

There are both a XS35V2 and an XS35GT V2 available, sporting the D525 Atom processor, bumping the processor to 1.8Ghz. Whichever one you choose should do the job of a small, low-powered, silent, but flexible machine for whatever purpose you want to put it to.

My system broke down as follows: