Review of the Nexus 7

I was lucky enough to receive a Nexus 7 as a Christmas present, so having had it for a few months I thought it worth a quick write-up. 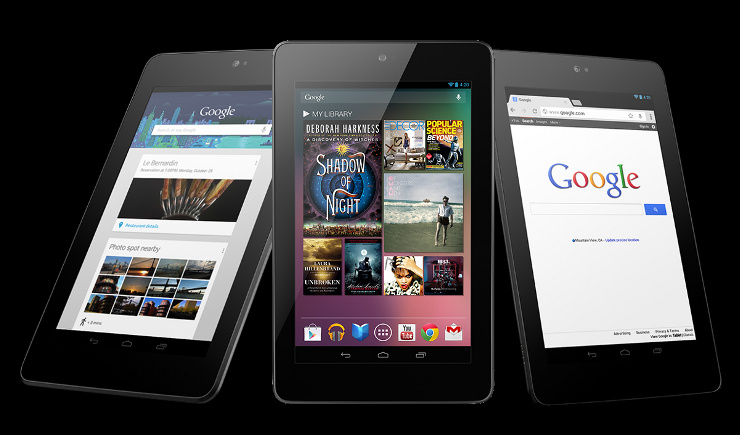 I wrote a while ago that I didn’t think 7″ tablets were worth it, and for a while I wasn’t interested in them. I owned an iPad in any case. I did start to find I wanted to look things up while in a different room to my computer or the iPad and so having an extra tablet would be useful.

The improvements in tablets of that factor and the cost helped sway my desire. Then it came down to a choice of which one. The iPad Mini had not long been announced, the Kindle HD was coming to UK shores and there were offerings from B&N and Samsung as well as others.

I wasn’t interested in a cut-down Android experience, which ruled many of them out (the thought of rooting them didn’t appeal) and hence I hinted on my desire for the Nexus, as it came with an unfettered version of the latest release.

I have an Android smartphone, though its an old version and much of the interface is hidden behind the phone manufacturer’s skin, so it was hard to get a good impression. I’ve been impressed with 4.2 and it’s proved easy to use, easy to get to grips with and obviously affords a lot more flexibility than iOS. Home screen widgets, for example, save a lot of time delving into specific apps and provide a quick overview.

I’ve been pleasantly surprised by how it does a number of things, such as zooming in on links with small target areas in Chrome. The range available in the Play store has allowed me to do everything I’ve wanted. I also prefer how notifications are handled compared to iOS as well.

It’s a nice size to fit in one hand and while easy to hold for extended periods, it’s still a little too heavy for reading lengthy works when compared to my Kindle. Despite the one-handed use I’ve found typing on it a pain. Using it one-handed has meant plenty of mistyping and searching for special characters, while it’s slightly too big to type two-thumbed in landscape orientation.

It’s certainly the size for consumption, being perfect for videos, though perhaps too large for just audio. Reading books via various apps has been fine and it’s great to grab when you want to perform a quick web search. It’s less well suited to long-duration activities, such as chomping through my list of RSS feeds.

I’ve also found that reading web articles is easier when sending to the Kindle app or using some other tool to strip it back to just the article text, web pages packed with adverts and numerous columns quickly become tiny and/or tiresome to read.

The screen is gorgeous though, bright and sharp and very engaging, you want to look at it. I think books actually look better in the Kindle app on the Nexus than on my Paperwhite, with better contract and sharper text (in good lighting conditions, obviously) though it does show fingerprints and dust much more.

Opting for the widescreen aspect ratio was great for videos and largely works for everything else, but surfing web pages in landscape does make it feel like looking through a letterbox, with endless scrolling needed. The fact that you couldn’t originally rotate the home screen does suggest it was designed to be used in portrait, and that’s largely how I do use it (as opposed to my iPad, which I predominately use in landscape).

It has a physically smaller battery than my iPad, a larger resolution display and a faster processor, so it’s perhaps not unsurprising that it doesn’t last as long, but even when I’m not using it the battery does seem to drop quicker than I’d expect.

Part of this may come down to having switched automatic updates on for many of the apps and I rarely pick it up without finding another one having updated itself. In use it doesn’t seem so bad, but having to charge it once a week, compared to once a month for my iPad, I do find a bit of a bore.

A plus in its favour is the micro-USB connector, which means I only need one cord for my phone, Kindle and Nexus when travelling (and it saves hunting the house for the cable/an empty socket).

Google Play is rapidly expanding and I was very impressed with the range of software on offer. I haven’t bought any media for it yet, but the fact that they’re branching out into movies, music, books and more means you get that seamless integration that Apple has long-since achieved. That said, it’s not as vast or comprehensive as iTunes, nor does it have the same library management which their much-maligned software provides.

I also found that Android versions of some apps were shadows of their iOS equivalent or were entirely missing and I had to use a third-party app to achieve what I wanted. Conversely there were apps available that you can’t get in the App Store, so it really is horses for courses.

Here’s the real kicker against any iPad. I opted for the 16GB Wifi-only model and at £159 it comes in so much cheaper than any of Apple’s range it’s hard to argue against. Even if you only use it as a media player it’s still much cheaper than an iPod Touch

As a piece of hardware it is amazing, especially when you consider the cost. It’s well built and well designed (though I’d like a backwards facing camera). It’s also backed up by a good OS and a growing ecosystem. It’s a good, solid purchase, but the 7″ form factor is never going to be a replacement for your laptop or PC, the screen size is far too small to be very immersive and too tight to allow you to work productively.

It’s a single app device and you wouldn’t want to flick back and forward too often or split the screen. If you need access to a lot of information it can show screens of widgets to combine into a dashboard, but that’s about it. This is a device really designed for consumption, not creation.

If I could only have one tablet, this wouldn’t be it, I’d look for something bigger that can be used to do more. It’s price does mean you can afford to dedicate it to a task or a room though, allowing quick access to all sorts of things. The size also makes it very portable and it’s a great media tool.

So I’d recommend it, definitely, but with caveats about how and where you’ll use it. If you want something to be a jack of all trades or replace your netbook/laptop then this isn’t it, otherwise, dive in.