I've been thinking of building myself a little PC for a while. Partly I like the idea of a small PC, but also I was looking for lower power consumption. My Mac Pro, although a great machine, ran 180W idle. It also took a long time to boot, so I wanted something I could leave in sleep and just wake to use. That basically meant going mini-ITX.

I spent a lot of time researching cases, motherboards and CPUs. The mini-ITX segment is growing, but still fairly small. I was trying to balance four things: power consumption, noise, size and performance.

They're not easy things to match and there were some trade-offs.

I saw and pretty much set my heart on the Antec ISK 300-65 case from the start. It was tiny, looked good, was pretty cheap and included a fanless 65W power supply. Unlike most other cases its size, it provided space for two 2.5" HDDs and a slimline optical drive. I wanted two drives to match my old system; an SSD for boot and a regular disk for storage. I wanted to avoid a regular-size ATX PSU as they don't make them below 300W and even the 80Plus units aren't efficient below 20% of their power draw (just why does no one make a 150-200W one?). So 65W was my goal power usage (ideally I wanted 30W idle).

I really wanted an i3 system. The i3 530 has onboard graphics and I saw plenty of articles with it idling around 30W, but it could jump up real fast (with a TDP of 73W). It seemed to offer a great balance of power and performance. I almost committed to it, but found that none of the boards offered 2560x1600 output via any of their ports. The chipset can do it, but not one the motherboard manufacturers offered it.

This was a problem as I wanted to hook this thing up to a 30" monitor at some point. It would mean an additional graphics card, which basically guaranteed me being over the 65W. So I turned to AMD.

I already have a 5050e in my HTPC and know how little power they use and heat they produce while still offering a good level of performance (remember, I found a dual-core Atom almost did everything I needed for day-to-day running). So I knew one of the newer X2 chips would do it (I could have plumped for a three- or four-core chip, but extra cores only really count when doing things that need/use them -- usually transcoding video -- higher clock speed is better for general use and the X2 offered better speeds). None of the AMD chips competed with the i3 on performance for the money (or performance per watt).

Finding a motherboard was a problem though. There just aren't that many mini-ITX boards around and of those, only two or three are AMD. They were all way more than the Intel ones, which negated the benefit of the cheap CPUs. In the end I found the Asus M4A88T-I, which was relatively new, but seemed to offer what I wanted it. I had to settle for SODIMM RAM (usually used in laptops) and I didn't get dual screen graphics, but I did get a 2560x1600 output from the onboard ATI HD 4250.

I also knew the stock CPU coolers were OK on AMD (having used one on a build for my brother), whereas the Intel ones for the i3 came in for a lot of stick in the articles I read and I couldn't find a good low-profile replacement.

What I ended up with (all sourced from eBuyer) was:

Additional hardware (I already had):

Putting it together was a bit fiddly (mainly due to the size of the case) but generally went OK. The main issue was that the PSU ATX cable was as far away from the ATX socket on the mobo as it was possible to get.

The PSU DC card is held in the case by four screws, so I tried turning it around, this sort of worked but it meant the cables ran over the side of the case, making it impossible to put the lid on.

I did manage to get the cable in by plugging in both ends with the PSU board loose, then wrestling it into position and bolting it down. This leaves the ATX cable taught across the top of the CPU cooler though. Not ideal.

I didn't originally put the Fanmate in and added that after some trial and error with the noise of the fans. I abandoned the BIOS controlled speed setting and used the manual speed controller instead for the chassis fan. This worked better for noise.

Installing Windows 7 64-bit was a bit more fun though. I changed a few settings in the BIOS before hand and it wouldn't get past the 'Starting Windows' page after the loading files screen. I searched online and thought it was maybe that I had the drives set to AHCI instead of IDE, but no joy. In the end, resetting the BIOS back to its default settings solved it and I could install it.

Some photos from putting it all together. Click on them to see larger versions. 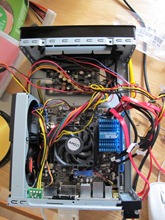 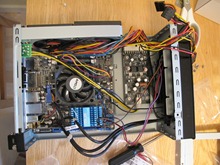 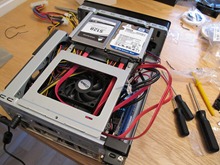 While I was transferring files here and there and importing music to iTunes the system seemed to grind to a halt. This worried me. Since then, it's actually been fine and is running as quiet as any desktop I've used while never struggling like the Revo does when trying to play Flash and trailers on Apple. The Atom is running two screens though and this is only outputting to one 22" for the time being.

Thus far then, the goal of having a reasonably performing system is OK.

Two of my main aims were to build a very quiet machine that used very little power. Largely I think I succeeded, though there may be some room for improvement.

I'm using the stock AMD cooler and a Scythe 80mm fan to replace the (reportedly) noisy stock Antec case fan. I have a Fanmate 2 on it to dial it back to 1,000 RPM, which means the CPU cooler is running below 2,000.

At these speeds the machine is quiet (not silent), but much better than my Acer Aspire Revo, and the CPU is reporting 39 degrees C (22 in the cores) and the mainboard shows 46. I have tried it with the case fan disabled and running some heavy apps it got up to the mid-sixties. Not a problem, but the RPM on the CPU cooler increased and so did the noise. You could probably run the CPU passive with two case fans trickling along at 1,000 RPM. I can sometimes here occasional clicks from the WD HDD.

The Asus disk supplied with the motherboard contains a utility called EPU which has three settings to control the power use and functionality. There's Max Power Saving Mode, High Performance Mode and Auto Mode. They're fairly self explanatory and the software basically throttles the CPU, GPU, HDD and fans.

By way of example, using the Auto Mode, my machine idles around 39W, when it High Performance Mode, it idles around 42W.

As standard, the BIOS is not set to regulate the fan speeds. Turning this on makes a big difference to the noise of the system as all the fans don't run flat out.

CPUID Hardware Monitor shows the processor only uses watts when it needs to, taking 12W most of the time and firing up to the full 45W only when necessary. That's matched by the readings from the power monitor I have it plugged into, which shows idle in the 40-45W bracket most of the time with spikes to 65W, sometimes slightly higher.

In S3 sleep it draws just over 2W.

Overall then my goals seem to have been met. I have a small system that draws little power and is quiet (not quite as quiet as I would like maybe, but it is currently two feet from my head and much quieter than the Revo is). All this while not sacrificing performance as a general surfing, email, writing, etc machine.

If I'm being brutal I'd admit I would like it to draw even less power (I had a figure of 30W idle in mind) though this may not be possible with the UK power supply (240V, where most power consumption reports are done in the US where they only draw 110). I would also like the machine even quieter. Though with my CPU not generally going above 50 degrees I think simply running the CPU cooler slower may resolve it.