Some time back I set about creating a Home Theatre PC (HTPC, or media centre PC if you prefer). My conclusion included mention that I wasn't 100% happy with my build. I rarely used the machine to be honest, but I was getting fed up of my PVR so went back online to see what I could do to my media centre.

I found Theydon Bois' build over at the AVForums (which is a great resource by the way) and some of the screenshots were awesome. I set about trying to recreate it on my PC. I downloaded the updated version of MediaPortal and played around but it just didn't work well enough for me.

I mentioned in my previous write-up that I liked Vista Media Center. It had a slick interface and just worked, rather than requiring lots of setup and tinkering like MediaPortal. When I saw what you could do to Vista Media Center with MediaBrowser I was sold. The problem was, my hardware wouldn't support Vista. I tried downloading the (new at the time) beta of Windows 7 as this was supposed to be much less resource hungry, but I wasn't able to install it. I was going to buy a small off-the-shelf PC, but I couldn't find one that had the specs I wanted at the right price, so I bit the bullet and upgraded.

I spent a lot of time reading around for suggested hardware and in the end I chose:

I bought all this from Dabs.com, being the cheapest supplier for most if not all the parts.

From the existing parts I reused the following:

The motherboard was mentioned in a lot of HTPC builds and has a good rep (and should be capable of HD playback if I decide to buy a Blu-ray player or download HD content). The RAM is faster than the standard stuff I was going to buy, but it was cheaper for this from Dabs than the standard stuff direct from Crucial (go figure). I like Crucial RAM, it's usually a good price and I've never had any fail on me. The processor is a 2.6Ghz 64-bit dual core beasty, but I was mainly interested in the low power consumption compared to other processors (45 Watts), for a machine that was going to be on a lot it's important. Likewise the WD Caviar Green, low power and a good rep. Again, I have had lots of experience with Western Digital drives, all good, and the Samsung Spinpoints, the other drive in contention as they're also supposed to be very quiet, had some reports of failures, too many to make me happy. Scythe CPU coolers have a great rep, I couldn't fit the full-sized Ninja into my box (despite it being huge), so went with the Mini, which I'm running fanless (they are two case fans right beside it).

Installation went smoothly and I was soon ready to install the OS.

I found that, by the time I moved all my recorded TV and ripped DVDs onto the main disk I was out of space. I also found that playing DVDs back on the old ROM drive I had was very noisy, so I later bought:

These were from Novatech.

Playing back DVDs from the disc was still loud, not so bad though. I don't usually bother now, I just rip it to HDD and play it from there. So build costs went up to £643.72.

I also bought a copy of Vista Home Premium (32-bit Upgrade) at a cost of £65.52. Taking the build costs to £709.24. This meant I got Vista Media Center though. As I had an upgrade it was a bit of a pain as I had to install XP first (later I found there's a way around this, but too late!). Installation went smoothly, VMC picked up my tuners no problem and I was soon watching TV.

I spent a lot of time transcoding my .rec files to mpeg-2 using the batch process in VideoReDo and then transferred everything onto may main machine (well, an external HDD at a time, which is when I spotted I was running out of space and bought a second drive).

I also installed iTunes as I use it on my PC to listen to and buy music as well as the odd TV show. I setup a back-up process to copy everything over to the media centre PC and I now have two iTunes installations that work perfectly. I went this way because it meant not having to have my other PC to play back any of the media and, as a nice side effect, I get a complete back-up too.

I have another process that does the same for my images, so I can show them to people in the lounge on the TV should I wish to.

My motherboard does support 'Just a Bunch of Disks' (JBOD), which is similar to RAID 0, without the problem of one disk failure taking out all of your data. Unfortunately, despite vain attempts, I think I needed to set this up before I put data on my first drive (the disks need to be formatted together). Thankfully Media Browser let's you create a file that tells it to read multiple folders, even on different disks, appear as one in the UI and I just moved my TV recording folder to the second disk, you can then set this in Media Center.

I also installed a pack of codecs to help me support playback of a variety of formats. Most of mine were MPEG-2, but there were a few odd ones too. And I was tempted to squeeze some down using xVid or DivX, but decided buying additional storage space was cheaper than spending my time compressing my videos.

Something else to bear in mind, I originally had problems playing back DVD rips with Dolby Digital surround sound, the reason for this was although my TV had some sort of fake Dolby Digital support, it wasn't right. My sound options (the Supported Formats tab on the properties of the playback device) had Dolby Digital ticked, just uncheck whichever options your TV/amp/receiver doesn't support and DTS and Dolby Digital and the system will probably pass the AC3 audio straight through and solve it (you may need to switch pass-through on in the options of the code pack for ffdshow).

I found a ton of add-ons for Media Center, but I only really use and care about one: Media Browser (formerly Video Browser). I also changed the theme, . Having had mine suddenly revert back to the default theme, which is ugly, and find that the black theme I mentioned is better, but still ugly, I tracked down my theme to the Back in Black theme. I didn't install mine using the dll though. I used an app called MediaCenterFX, which seems to be very hard to find, so I've stuck a copy of the version I us up here. I have also uploaded a copy of the theme file for Back in Black. 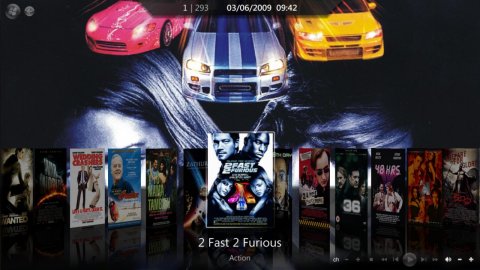 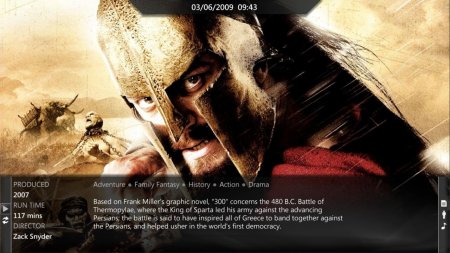 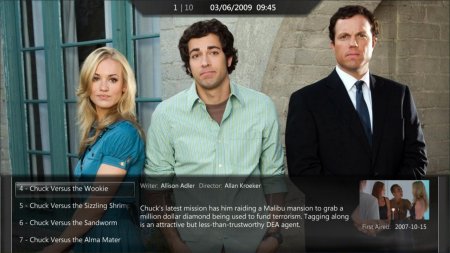 As you can see, the reason for using it is because it makes Media Center look awesome. Seriously, this adds the wow factor, it's great showing it to people when they visit. It's very customisable too, check out the gallery and this thread in the forums for more screenshots.

For metadata I found I had to use a combination of Media Browser (which will do most), Media Scout (again, did most of the rest) and Salami's Movie Organizer, which I found the best and easiest, but it did less bulk than the others.

Another essential add-on is Lifextender, which automatically monitors your recorded TV folder and processes the files to remove adverts. It's not perfect, sometimes it doesn't get them all, sometimes it shaves a bit off the programmes, but generally it's very good and saves a lot of the hassle of fast forwarding (something I don't find too great in Media Center, preferring the 30 second skip instead).

I use a couple of other plugins, though most I rarely use, for things like YouTube, you can use Yougle, but I've found it's easier to just use the browser.

Having just totalled up the cost of the build I probably could have bought a machine for about that sort of money. To be honest though, they wouldn't have matched my spec for that price. I have a machine with 2Tb of storage, most off-the-shelf models were 500Gb, or a lot pricier for up to 1Tb, and dual tuners (most are single). I also have a machine which is silent most of the time (I get a strange high pitch whine after it's been on for a while, something to investigate, I suspect it's either the PSU or one of the HDDs). Plus I have more expansion options (I suspect I'll need another drive at some point, hardly any of the my movie collection has been digitised, that's going to take a lot more than 2Tb, probably more like double figures, and that's before HD content).

On the downside, having just run a Watt meter by it, the machine uses 4W in sleep (not bad), but idles at 80-85W and tops out at about 105W when recording and playing back multiple content. That's much better than my desktop machine, which uses about 180W at idle and over 200W when in use, but it's still higher than I'd like it to be. I may investigate a mini-itx system next, the new dual-core Atom's with Nvidia's ION look pretty nice, should run Windows 7 OK, can do HD playback and use less power.

That said, I'm very happy with the system, I've had a couple of people interested in building one and it generally runs very well. I occassionally need to reboot it, but usually it just sleeps and wakes fine, it runs 1080p content OK and being able to access my music and the internet have proved useful, especially as my main machine takes so long to load, this HTPC is out of sleep and usable in about 5 seconds. I'm very happy with Vista Media Center too, it works well, has proved stable and is nicely customisable. It reliably records things and the huge amount of stage means I don't have to worry about running out, plus I can easily watch content from my other machine with the need to convert it. I definitely recommend using a PC this way, even if you buy one.