How to Decide on a Processor

It used to be fairly easy to figure out how good a processor was in relation to another, the main manufacturers (Intel and AMD) had two lines apiece — one budget line (Celeron/Duron) and one performance line (Pentium/Athlon) — and the higher the clock rating (measured in Mhz/Ghz) the better it was. These days the raw clock speed is only one aspect of how fast a processor is and with the chip companies updating their ranges more often, using multiple cores and inventing their own benchmarks, it can be very hard to understand what exactly you’re buying. Now there is an argument to say we don’t need to worry about processors any more. Any chip offers at least enough power to do anything a user wants unless they plan to do lot of video rendering (and even then it’ll just be slower). While that may be true, I still recommend avoiding the budget end of the CPU spectrum when buying a new computer so you have a machine that’ll last as long as possible. The price difference is usually minimal and it’ll be more future-proof (I installed Windows 8 on a six-year-old machine recently, the only upgrade it had received in that time was some more RAM). So knowing what you’re buying is still useful, and it lets you compare apples with apples when it comes to prices.

Intel and AMD are still the big boys in the desktop and laptop markets, if you want to run Windows it’ll be on their chips. If you’re looking at a Mac, they’re powered by Intel chips. The current ranges broadly divide as follows:

To be honest, I spent a lot of time looking at the various chip ranges and ended up more confused than when I started. The Intel i-series chips seem the easiest to follow, which AMD seems to be replicating with an equivalent A-series (the higher the number the more powerful the processor) but there are still some old chip families kicking around to confuse things. Personally, I’d recommend sticking with the newer i-series and A-series/FX chips from the relevant vendor. I get the feeling the others are likely to be phased out over time and they use different physical sockets which makes upgrading problematic. Each range seems to have an equivalent mobile version, so the same applies to laptops. As a rule, Intel chips are more powerful (at least at the upper end) but more expensive while AMD chips are usually usually offer better value for money. So if you want performance, stick with Intel, if you have a budget, look at AMD.

Where to Find Out More About a Processor

Cheaper computers (the deals that look too good to be true) will often come with slower or older processors, so while they may look a bargain, you may be be falling for a marketing trick. So where can you find out more about the chip it’s boasting so you can compare it against other computers? Well, there are a few resources to let you do this. CPU boss offers a nice interface and the option to compare two processors, it also lets you pick chips by price, performance and energy usage among other things. Some of the stats don’t make it entirely clear, but they do offer simple league tables for price, performance, value and overclocking potential. CPU benchmark has several lists offering quick ways to see CPUs that fit into relevant categories and how they rank, as well as the option to search for a particular processor and see where it falls (both on performace and value for money). Basically, the higher the average CPU mark the faster the processor. It can quickly show if you’re looking at similarly-ranked processors or if one is significantly better than the other. For general discussions and reviews, Tom’s Hardware has a nice section on their site. When reviewing computers (usually for other people) I look through the specs of a machine and find the name of the processor (usually on the detailed specs page rather than in the main description) and pump it into one of the sites above. I then make a note of its benchmark score and check out the release date (more than a couple of years and it’s probably on its way to obsolete). I then have an idea of how they match up. 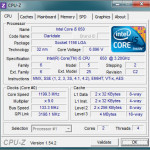 If you’re looking to upgrade your machine, or just want to know what you’ve got under the hood, grab yourself a copy of CPU-Z. It provide a comprehensive breakdown of your system’s components, including the type, codename and speed of your processor. When upgrading your processor you’ll need to know what socket type your motherboard is and what processors your motherboard will support (you can usually find a list on the manufacturer’s website once you know the model, something CPU-Z can provide). You should also take a look at your cooling arrangement if you’re swapping to a chip drawing a lot more power (generally the faster the chip, the more power it’ll draw and the more heat it’ll generate). If you buy a retail pack your CPU should come with a fan, you should be able re-use your existing cooling fan if not (with some new heat conductive paste), but it’s worth checking if it’s up to the job. (It’s also worth checking your system’s power supply is up to the job too, but again, it’s unlikely to be a problem, most are so over-specified you could power your house off them). The biggest differentiators between chips are the clock frequency (the GHz rating) and the number of cores. The latter only really makes a difference if you have apps that can use them all and/or want to do a lot of processing. Transcoding video is a good example of this, rendering images is another. Otherwise, more cores won’t make a vast amount of difference.

At the End of the Day

The question still remains as to whether a faster CPU is actually going to be better for you. Does a benchmark a few hundred points apart really make a difference you’d notice? Probably not. For most uses the CPU speed is largely not an issue. There are relatively few tasks where it become important, although it made add to the overall snappiness of your system. I’ll be covering the best upgrades to your machine at some point, some of which will have a greater impact on performance than a faster processor.