I doubt the rise in tablets, laptops and mini PCs will see the end of people building, repairing or modifying their computers, despite many being sealed, so a computer tool kit is invaluable. There are a number of kits available to buy and you only need a couple of tools to do 99% of the tasks you'll ever attempt. You may even have many of the tools.

If you're going to buy a specialist computer tool kit they range in size from a handful of tools to a whole briefcase and with prices to match. Having had to support computers both personally and professionally I thought I'd share what has actually been useful.

This is one of the most useful tools in my kit, especially when a screw gets away from you. Aside from being able to reach places my fat fingers can't, it's useful for putting screws back into locations deep in the case, generally you use this to get a turn or two so it'll hold before you grab your screwdriver. It'll also save you a lot scratches from the rough edges inside most cases.

Strong magnets generally aren't recommended inside computer cases (or near electrical equipment in general), so the mechanical claw type is the best option.

For PCs it's really down to a couple of Philips-type screwdrivers.  Sizes 1 and 2 should cover every application you'll find on a PC as the case, motherboard, drives and expansion cards generally all use the same size screws across every different make and model.

I'd recommend fixed screwdrivers over the kind with removable bits (they're usually  shorter and the bits can fall out). The removable bit types do allow you to pack a lot more types of screwdriver in a small space though (I do have one in one of my kits), but is this is your only screwdriver look for a set with an extension bar to help reach some of the screws hidden in the depths.

A couple of traditional fixed-head Philips screwdrivers and then one with interchangeable bits would probably be the ideal.

If you're likely to be taking apart things like Apple computers, laptops, tablets or want to go hardcore on things like hard drives then some precision/jeweller's screwdrivers and a kit including Torx bits will be necessary.

Don't worry of they're magnetised, the power in them won't be enough to disturb the electronics.

Not a heavily used item in my kit, but they can be very handy for case thumbscrews that have been over-tightened and, in a similar way to the part retriever, can help to reach into tight spaces. For that reason I'd suggest a set of needle-nose ones.

Arguably not a tool, but for copying drivers onto a machine, backing up files, even booting from if necessary, a flash drive is very useful to have in your tool kit. Buy one that'll go on your keyring, job done.

Doesn't have to be anything special, just something to keep it all together and make it easy to carry around.

That really is about it for essentials, you can do most things with just that.  If you do a lot of PC work or want to be prepared for all eventualities, then carrying the following certainly won't hurt.

As mentioned above, you do get the odd weird one so something with a range of bits is handy to have and doesn't need to take up much space.  Some flat-ended screwdrivers are always useful for prying open cases (if nothing else) and some small precision/jeweller's screwdrivers can come in handy too.

It's amazing how much dust (and other things) a computer sucks in over the years, so if you have to work with machines older than 12 months, or are used in mucky environments, a way to clear it out is handy. I usually use a vacuum cleaner (any type with a hose will do) but they're not very portable, so a can of air might be a better bet.

Useful when working on dirty machines, because no matter how much you try and clean them you'll still get covered in dust. Also useful for the rare mucky jobs like applying thermal paste. They're also another defence against scraping the skin off your hands on rough edges.  A couple of sets of latex gloves in your kit will do the job and you can buy a whole box for very little.

When taking a PC apart you'll find the number of screws soon mounts up, so how do you remember what went where and avoid mixing them together? I've heard of people using ice cube trays, but you can get little boxes that are subdivided (something like pill boxes) and will allow you to keep screws separate.

Always useful to have a spare set of cables with you, especially things like Cat 5e network cables, power leads (the 'kettle' lead, officially an IEC C13 lead) and SATA cables. Others you may want to include are USB leads (micro, mini and regular A/B), display leads (VGA, DVI and HDMI), an RJ11-to-RJ11 and RJ11-to-BT phone leads for use on ADSL modems.

A spare network cable is a cheaper and easier solution, but should you encounter a situation where you can't replace the cable (it's too long or routed in such a way it cannot be removed) then this could prove handy. They're not particularly expensive.

Computers tend to be stashed under desks and to work on them I'd obviously advise dragging them out to a suitable work area, but if you need to plug in cables or have a root around under a desk or in the depths of a rack then a torch will prove invaluable.

Faulty/misbehaving wireless mice, keyboards, remotes and other devices can often be solved by replacing the batteries, which means finding a set. Carrying a few AA and AAA batteries can solve a problem in seconds.

Useful if you find the manufacturer has cable-tied things together, otherwise not much use.

Again, for ADSL support a microfilter might be useful (though I've never found one to be the issue, yet).

If you want to make your own network cables then this will be necessary, otherwise it's completely unnecessary.

There are a few things that many kits include that I've never found a need for, things like: anti-static wrist straps, chip extractors, tweezers, wire strippers, sockets, hex (Allen) keys and soldering irons.

There may be one or two specialised jobs where you'll may need a particular tool, but they're few and far between.

I have two kits (though I'm looking to add to them), one of which largely stays at home, neither was very expensive and I've had them for years.  The closest I've found on Amazon are: 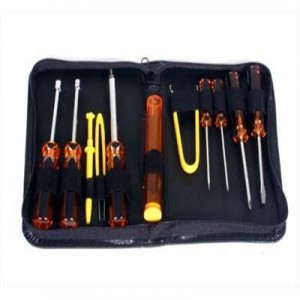 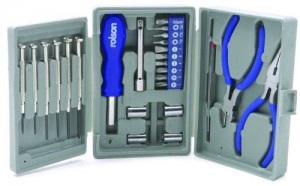 As you can see, you don't need top-of-line stuff and it doesn't have to be expensive.  In most cases portability is far more important when you're already carrying (potentially) replacement parts/a new computer/a laptop etc so you don't need to go overboard.  If you want to splash out a bit more by all means do, but I'd advise spending it on better quality core components rather than extra tools you'll probably never use.