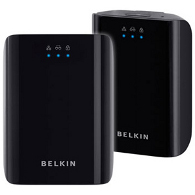 I've had these adapters for some time, they were the first gigabit adapters on the market and at the time I was interested in streaming some HD content. As these were five times faster than most of the others on the market, I thought I would give them a go. Incidentally, they replaced the Devolo's I've previously reviewed.

As with any other powerline network adapter I've used (and I've used a few) there was zero setup, plug them in and away they go, the only concern was the speed.

Now, I didn't expect to get gigabit speeds, nothing in networking gets the speeds they say (for a variety of reasons), but even if they gave me 20% that was 200Mbps. I have been suspecting for some time that they weren't performing anywhere even near that well and I happened to have a pair of LEA 200Mbps adapters so thought I would give them a comparison test.

The two computers I was using both had gigabit network adapters and, while one was plugged straight into the adapter, one was connected through a gigabit switch. I downloaded and used Lan Speed Test to give me the figures.

I set the file size to 100Mb for all but the last test, where I used 200Mb. The first two tests were carried out on one day, the other two tests the next. Once I finished the tests with one set of adapters I changed them for the others, keeping the sockets, computers and state of the machines the same in both cases. All figures stated in Mbps. I've underlined the fastest for each test.

There is a light on the front which shows if the connection isn't strong enough so it's only running at 100Mbps, but that wasn't lit (it shows orange instead of blue, I had all blue). It's also worth saying I have upgraded them to the latest firmware.

As you can see, against the LEA plugs (and I've never heard of LEA, they're a French company it seems, the fact that they don't appear in a Google shopping search suggests they're not stocked by any of the big UK retailers and therefore not anything special) they actually come out slower in a lot of circumstances and hardly much better considering they're supposed to be five times faster. They also seem to be very inconsistent compared to the LEAs which were closer across the tests and in terms of read and write speeds.

So, my advice, don't wait your money on gigabit powerline adapters, certainly not the Belkins, as they won't be any better than even unknown brand 200Mbps plugs.