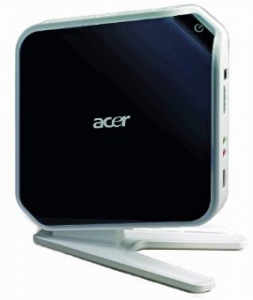 I didn't buy the Linux version because I wanted Linux, but the Windows version was significantly dearer and I had a three-computer licence for Windows 7 Home Premium that was only installed on one machine. The machine obviously doesn't come with a monitor, but does have a keyboard and mouse (mine were wired, some have wireless). The keyboard is OK (no number pad) but the mouse is a bit cheap, they work OK though. It's kitted out with gigabit LAN, wireless-N, eSATA port, a raft of USB ports, HDMI and VGA (which you can hook up at the same time for dual monitor support) outputs, SD card reader and SPDIF audio.

Initially I was using it as a trial machine to see if the Atom processor and ION graphics could take over from my big Bertha of an HTPC (mainly with a view to building my own Atom-based one in the future). It runs Windows 7 perfectly (drivers are available from the Acer site). It worked OK as a media centre (though it struggled with the nifty effects in Windows Media Centre) but I had a few problems (mainly because I was using a networked HDHomerun that kept losing signal, or the network was dropping despite using gigabit powerline adapters, I also used a cheap USB stick which did no better, I may try it with a better one at some point).

I wasn't particularly impressed, especially as the standard hard drive was very noisy and made some worrying clicking and clunking. So I moved it to my desk with an eye to seeing if I could replace my main desktop PC with it. I have a Mac Pro that runs Vista but as, these days, I spent most of my time on it surfing the internet, writing blog articles, reading email and little else it seemed overkill, as did the 200 watts of power it drew.

I installed all my usual apps and, as a desktop machine it's been good. It's largely quiet (though the fans kick in when under load and it's noisier than both my HTPC and the Pro) and it still makes the ominous clunking and clicking from the drive. It also starts to struggle when you push it. Multiple tabs aren't really and issue, but playing Apple trailers sometimes takes a bit of time to get going and stutters at the start. Likewise having iTunes open along with a lot of tabs and a couple of other applications causes it to struggle. All in all though I'm very impressed. Especially as the light power draw (apparently 25 watts, I haven't measured it) means I could leave it on permanently without it draining the bank (I do tend to sleep it more often than turn it off).

Going back to the price it's even better, assuming you already have a copy of Windows or are happy to run Linux on it (it'll run most versions no problem) it's a desktop PC for under £200 (at the time of writing eBuyer was doing them for £180) that is more than capable for most people's basic needs. Even as a second machine or a server it would be ideal. Stick a USB (or eSATA) drive into the back and it'll happily serve media files and be more adaptable than a NAS as you could get it to host all sorts, from web servers to iTunes servers, anything you wanted, without drawing huge power and someone can always use it as an ordinary PC. All in all I'm impressed, I think there's going to be more applications for cheaper computers that offer just enough processing power.